You are here: Home / About / Board of Directors / Dr. Reggie Smith III

Dr. Reggie Smith III currently serves as Chair Emeritus of the Board of Directors for the United States Distance Learning Association (USDLA). In this current capacity, he provides board leadership to the association, members, and partners. The USDLA is a 501(c) 3 non-profit association formed in 1987 and is located in Boston, Massachusetts. The association reaches 20,000 people globally with sponsors and members operating in and influencing 46% of the $913 billion dollar U.S. education and training market. USDLA promotes the development and application of distance learning for education and training and serves the needs of the distance learning community by providing advocacy, information, networking, and opportunity. Distance learning and training constituencies served include pre-K-12 education, home schooling, higher education, and continuing education, as well as business, corporate, military, government, and telehealth markets. 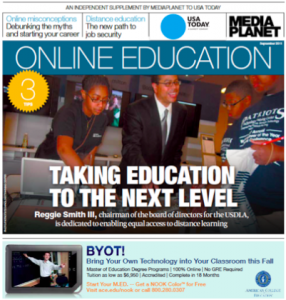 His leadership in establishing video teleconferencing in the National Guard began as early as 1995, and ultimately culminated in the deployment of a nation-wide, video teleconferencing system supporting the war fighting capabilities of the National Guard as well as active duty military forces. His strategic planning and interagency outreach initiatives in supporting the knowledge development and distribution capability of the Advanced Distributed Learning organization and the Joint Knowledge Online successfully bridged the cultural differences across federal agencies. As a promoter and advocator of distance learning, his contributions in supporting the development and deployment of distance learning technologies has proved significant in providing the essential knowledge sets and critical skills in maintaining a highly effective and efficient Federal Government and military workforce.

Dr. Smith, who was the first African-American president and then chairman of the United States Distance Learning Association (USDLA) in 2009 and 2010 respectively, has been recognized for his distinguished service in supporting distance learning to include the USDLA Hall of Fame Award, Black Engineer of the Year Award for Community Service, Federal Government Distance Learning Association’s (FGDLA) Hall of Fame Award, FGDLA Pillar Award, Virtual World Association’s Excellence Award and the Action Hero’s Award from the Missouri Association of Community Task Forces. In 1993, he also received a letter of commendation from then-N.Y. Mayor David Dinkins for supplying emergency programming during the asbestos crisis in N.Y. city schools.

A recognized authority on media and telecommunications issues, he has served as presenter, keynote or judge at various events and conferences, including the Honorable G. K. Butterworth’s Mobility A Game Changer for African-American Communities Braintrust, the VIRTUAL EDUCA International Conference, the e-Learning Conference & Expo, the TeleCon East, West & European Expos, the Technology 2010 Conference, the Third & Fourth Annual Youth Summits, the 22nd Black Media Coalition’s Conference, the 23rd Annual Pacific Telecommunications Council Conference, the 2003 Excellence in e-Learning Awards, the 17th Annual Local CableAce Awards, the Montgomery County Public School Media Festival, the State of Maryland School Media Competition, as well as a host of others. In addition, he serves as the Board Chairman for Patriots Training Technology Center (PTTC – www.patriots-ttc.org) reaching over 1,500 students per year with science, technology, engineering and math (STEM) programming and a Board Trustee for Berkeley College (www.berkeleycollege.edu), which enrolls approximately 8,000 students including more than 900 international students in its Baccalaureate and Associate degree and Certificate programs.

Dr. Smith received his B.S. in English Communications from Lincoln University in PA, his M.A. in International Management from the University of Maryland University College, and his Ph.D. in Education from Capella University. He has been featured and profiled in several magazines, newspapers, and television/multimedia programs reaching an audience of millions to include C-SPAN, Black Enterprise, Diverse Issues in Higher Education, USA Today, Year in Computing, Education Week, eLearn,Videoconferencing Insight, e-Learning, Profiles, the Achiever, the Washington Sun, the Root, U.S. Black Engineer and Information Technology and Teleconference magazine.